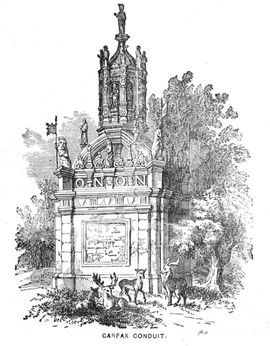 The Carfax Conduit at Nuneham Park (engraving of 1892)

On ceremonial occasions the Oxford Waits performed at Carfax, the crossroads at the heart of the city, where stood the conduit, an extraordinary fountain erected in 1610. It was carved with the image of an ox from whose pizzle issued water - or wine on special occasions. The Waits played loud music on shawms or ‘hoeboys’ as we know from the diaries of Anthony Wood:

‘May 1683. The Duke and Duchess of York rode to Carfax through a lane of bachelors and undergraduates. At Carfax, they were received by wind musick of hoeboys by the city musicians who stood on a gallery on the east side of the conduit, who played till they were out of hearing. During this time, and for about half an hour after, the conduit ran claret at two places. All which the vulgar sort and rabble received in cups and hats, and drank the Duke’s health.’

In 1787 the Carfax conduit was taken down and removed to Nuneham Park where it still stands today. 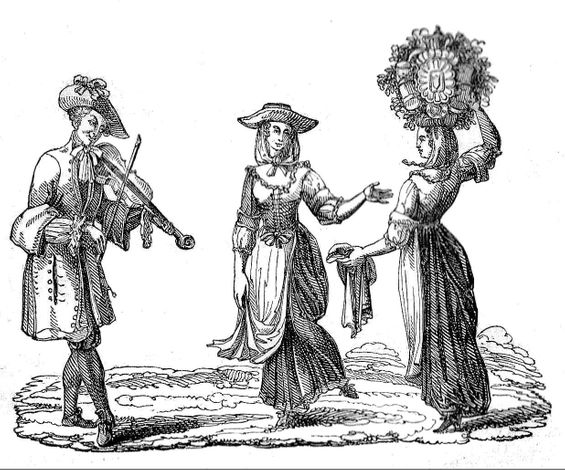 The 17th-century fiddler whose image has become iconic in our publicity comes from an illustration in William Hone’s Table Book. It shows a milkmaids’ May-Day Dance from a French visitor’s Memoires par un Voyageur en Angleterre. The author, Henry Misson, describes amusements in London in 1698:

‘On the first of May, and the five or six days following, all the young and pretty peasant girls, who are accustomed to bear about milk for sale in the city, dress themselves very orderly, and carry about them a number of vases and silver vessels, of which they make a pyramid, adorned with ribbons and flowers. This pyramid they bear on their heads instead of the ordinary milk-pail, and accompanied by the music of a fiddle, they go dancing from door to door surrounded by young men and children, who follow them in crowds; and everywhere they are made some little present.’

A punch-up in church 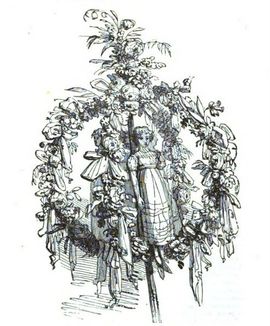 May garland from Hone's Every-Day Book

May garlands were a target of the Puritans. On May Day in 1633, a labourer named John Wildgoose of St Peter le Bailey parish in Oxford provoked a fight by trying to stop the annual ‘bringing in the garland’ at St Peter’s church. This seems to have been a popular ceremony, which people from other parishes came to attend. Witnesses testified that Wildgoose was, under other circumstances, a man of honest life and upright conversation who did not commonly injure his neighbours.

The case came to trial the following year, when Wildgoose was described in the Church court deposition as ‘a factious man or a puritan and consorted with other puritans.’ He refused to stand up in church for the reading of the Gospel or to bow at the name of Jesus. He had jeered and mocked when the parishioners wanted their Whitsun sports. When the King’s declaration was shown as a warrant for the civil and honest sports, Wildgoose scoffed, ‘then you may take your garland and set it upon the top of the pulpit if you will.’

On May Day when the parishioners brought in their garland, Wildgoose asked that the church wardens ‘throw that wicked toy or bauble out of the church.’  When the garland was brought in and the youths were going to ring the bells in the customary manner, Wildgoose said ‘O impudent and wicked people, God no doubt will avenge himself on you if he be any God at all.’

There was, it appears, a ‘great tumult and uproar in the church’; the garland was pulled down and torn, and many of the parishioners were beaten, punched and pulled by the hair.

Much more on the 17th-century May Day at www.maymorning.co.uk